Until January 29, Goo Hye Sun‘s art exhibit will be open to the public at the Hangaram Art Museum in Seoul Arts Center.

Goo Hye Sun’s exhibit is said to be in Gallery 7 of the Hangaram Art Museum, and she is displaying a combination of drawings, musical scores, and sounds to appeal to her audience’s senses.

Her theme was revealed to be “Purity and Fear, And Freedom,” and a section of her exhibit “dark YELLOW” was revealed on her V LIVE channel on January 19.

She explained the meaning behind her section:

“With yellow, I wanted to express how my innocence changes as I grow in to an adult.”

In Korea, yellow is a color that represents purity and innocence, as many kindergarteners or pre-schoolers wear yellow hats, bags, or shawls to help them stand out on crosswalks. Many kindergarten or pre-school classes are also named “Baby Chick Class.” 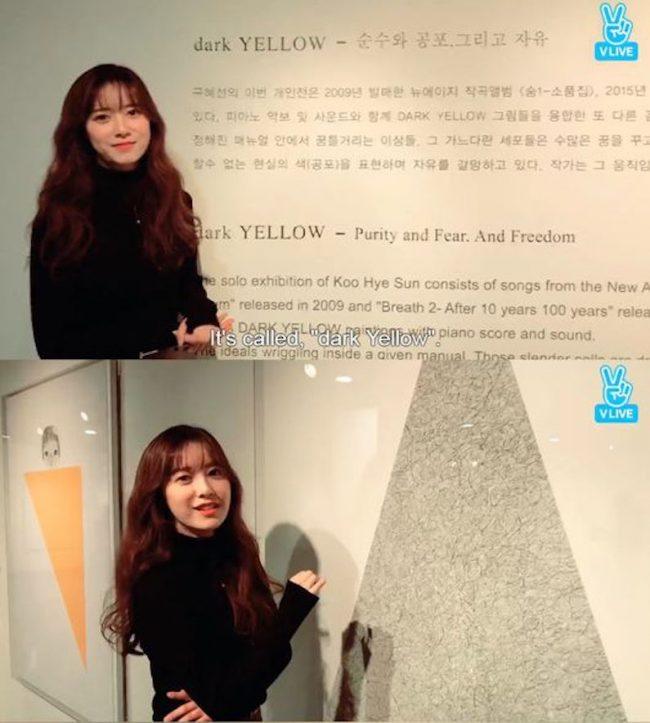 She also picked out a few of her drawings and explained the meaning behind them, ranging from the painting which inspired her to open the exhibit, from a simple diary entry which was turned into a drawing representing her free thoughts.

One corner of the exhibit was dedicated entirely to music. She wanted to find a way to express music in a physical form, after much brainstorming, she decided displaying the scores for new age music would be a creative way of accomplishing that. She also explained this section played music, but as the exhibit was closed at the time, there was no music playing.

While previewing her art, her fondness for triangles and sharp angles was prevalent. She explained she had always wanted to build a house, especially since she is now married to Ahn Jae Hyun.

“We are constantly surrounded by shapes, in particular, squares and triangles. But I realized the triangle has its own rule. If one side is too long, the other sides compromise to make its shape somehow. I feel this is reflective of our own society, where each side represents authority, order, and rules, respectively.”

She finished her video with an invitation for anyone who would like to come and see her art, and that they were not obliged to purchase anything; rather, she wanted them to simply enjoy it without any burden.