“Going forward we will continue to share our everyday lives together with all of you through social media. We will become a BTS that continues to gives you happiness.”

EXO was unable to attend the event, however, they sent in a video of their award acceptance speech.

“As our international fans personally gave us this award, this is a very meaningful award. Thank you to all the EXO-L around the world for voting for us. We love you!”

“Remember, even though we are miles apart remember you guys are always in our hearts. Again, thank you very much.”

Red Velvet sang their big songs from this year, “Bad Boy” and “Power Up.”

“First of all, the reason we were able to receive so much love from the world is because of our sunbaes who opened the road for us with their hard work. Just like this worldwide soribada (literally “music ocean”), we will become a MONSTA X who will hit [the industry] with a big wave.

The boys of MONSTA X performed this year’s hit “Jealousy”.

Trained in South Korea, 7Senses from Shanghai performed their hit “I Wanna Play”. They also hinted at a Korean release in their acceptance speech.

“To BYULHARANG. The fact that I can call your name on stage like this makes me happy. I’ll repay you by working even harder.”

Chungha performed a medley of  her number one tracks “Rollercoaster” and “Love U”.

“We wouldn’t be able to receive this award without UNME. We will always work hard in order to become artists that represent K-Pop and Hallyu.”

UNB showed off the title track from their latest release, “Black Heart”.

“Finally, we want to thank our fans who are our driving force and confidence. We will work harder in the future, so let’s continue to be together.”

“To our fans for making it possible for us to receive this award, thank you so much.”

Also from the Produce 101 Season 2 family, YDPP made up of MXM, Jeong Sewoon, and Kwanghyun performed their unit song “Love It Live It”.

“Thank you for giving us such a cool award. Thanks to our L.O.V.E. for making it possible to receive this award. We will work harder to be an artist our fans can be proud of, so please continue to love us.”

The unit showed off their most recent hit, “Deja Vu”.

The star performed her new song “Close Your Eyes” as well as hit song “One More Time” from her Jewelry days. 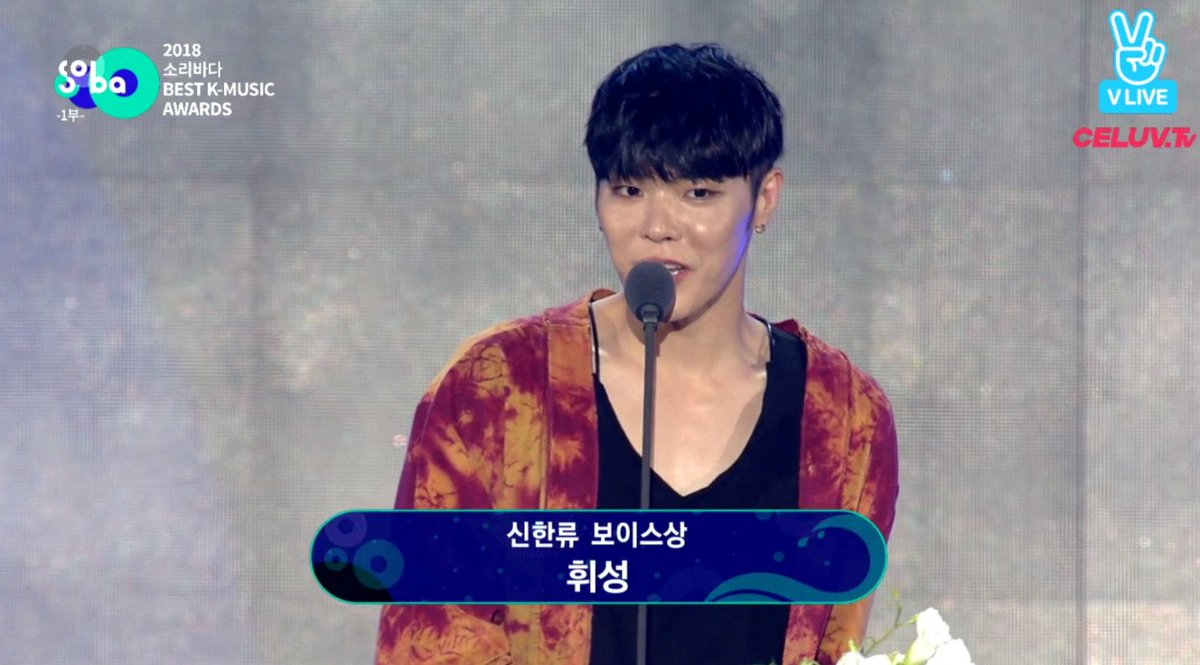 Wheesung thanked his family, co-workers, RealSlow Company team, and his fans as well. He performed his classic hits “Heartsore Story” and “Even Thought of Marriage” and had everyone singing along.

Seo J‘s “Try to Lie To Me” took the Korean music charts by storm, earning her the social voice award!

“I’m so nervous I don’t know what to say but I will work hard to be an constantly maturing Samuel. Thank you!”

Samuel performed his latest hit “Teenager” at the award show as well.

DIA was also unable to attend but sent in a video to accept their award as well.

“It’s a shame we weren’t able to be there with all of you. We hope to be there next time. Thank you for giving us such a big award.”

Kim Do Hoon is the main producer and CEO of MAMAMOO’s company, RBW Entertainment.

Crush was unable to attend and also sent a video message to his fans.

“For giving me this award, I will repay you with good and fun music.”

Mino was also absent from the event and sent a quick message to thank everyone for the award.

“I heard that my fans worked very hard to vote for me. Going forward, Mino and Winner will bring you more good music. Please look forward to it! Thank you.” 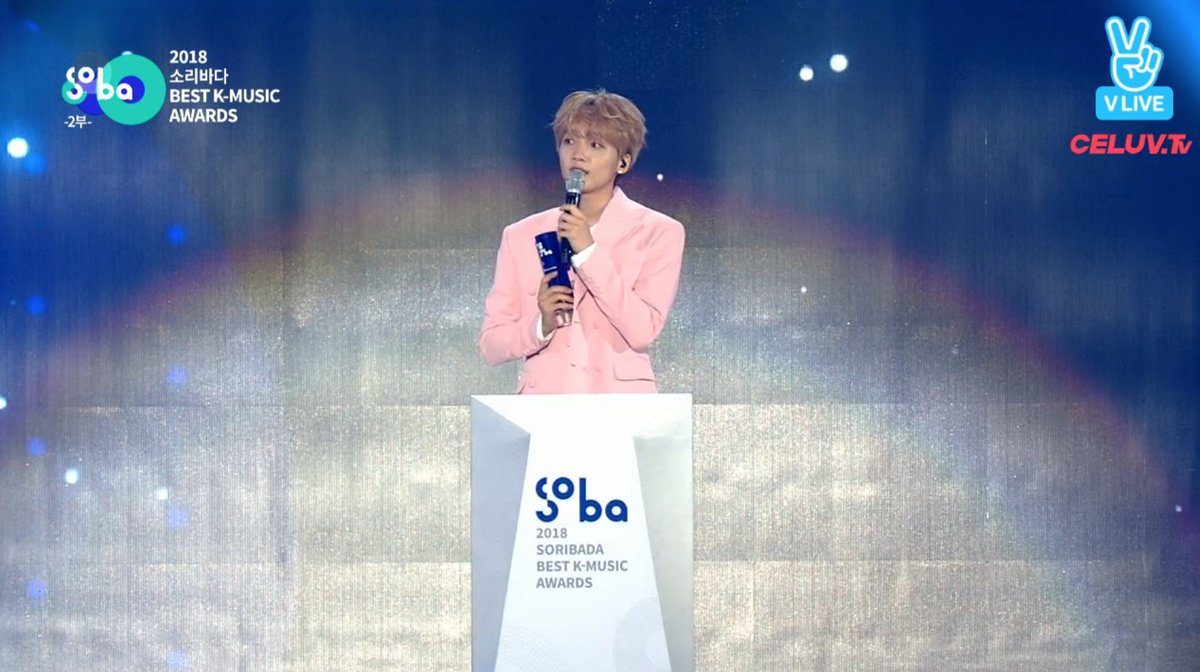 Sewoon won the award thanks to his song “It’s You” for the drama What’s Wrong with Secretary Kim.

Tae Jin Ah, father of trot and YMC Entertainment founder, made sure to shout-out his sons Wanna One during his performance as well.

“Since we know this award by given to us by Wannable, we will work hard to be a hard-working and more mature Wanna One. Thank you!”

The boys of Wanna One performed “Boomerang” and latest single, “Light” for Wannable as well.

Wheein had a bit of a laugh as the camera caught one particular passionate MooMoo on screen during their acceptance speech.

“We think it is an award that MooMoo, so thank you so much and we will work hard to be a Mamamoo that can repay MooMoo.”

“We will always work hard to be a modest The Boyz. To The B, thank you so much for getting us this Rookie of the Year Award”.

They also performed “Giddy Up”, showing off their rookie skills.

“Before we debuted, without each other, it was a bit dark and difficult. Thanks to all of you, we no longer fear the road ahead of us. With the title of Rookie of the Year, we will thank you through good music and performances.

Consisting of Korean, Japanese, and Chinese members, Nature showed off the pretty and powerful “Allegro Cantabile”.

“To our members, we love you a lot. Thank you to our members’ family and finally to our fans, thank you so much.”

“Actually, tomorrow is our 1 year anniversary and since we were able to receive such a big award, we are so happy.”

They played their song “Granulate” at the award show as well.

Although he debuted with hip-hop group M.I.B., Kangnam released his first trot album this year under Tae Jin Ah’s JinAh Entertainment. He performed his trot hit “You Do Well Yourself”.

Former The Unit contestant Seol Ha Yoon showed why she’s the new princess of trot with “Ring My Heart”.

“Thanks to Wannable we were able to get this amazing award. We are thankful to Wannable for every performance we do, and will work hard. Please look forward to our next performance as well.”

“This year especially, we were able to receive a lot of love from international fans through ‘Bad Boy’. We were able to challenge different genres thanks to our fans’ love. We will repay you through our hard work”

“More than anything, thank you so much to our NCTzens who gifted us with this award. We will work hard to show you our songs and performances, in order to have more happy days like today.”

“Thank you to all the L.O.V.E.s around the world, without you guys none of this would be possible, so we’ll continue to work hard for you guys. We love you, thank you!”

“Please continue to love us, and to all our fans who support and cheer us on — we love you!”

“This year, we received a lot of love for ‘BBoom BBoom’ and ‘Bam’ so we will work hard to repay that love.”

“As well, to Wheesung sunbae-nim who composed ‘Dance The Night Away’ — we received an award! Finally, to ONCE. Congratulations! We will work hard to repay your love.”

TWICE showed off chart-toppers “What is Love” and “Dance the Night Away” at the awards.

“We completed our world tour and encore concert recently. To our Monbebe who came to see us, we love you so much. We were really touched. We’re so happy that we were able to feel touched again today and we will work hard to become a MONSTA X that can repay that feeling to all you.”

Thank you for giving us such a big award. To FNC Entertainment, our staff, and our loving ELVIS — thank you so much! We will work hard to be an AOA that shows only good sides to us.”

They also performed the playful and fun song, “Bingle Bangle”.

“ARMY, there has been so many happy things happening lately right? Just like [Jin] said, thank you to all the staff who made it possible for us to stand here. Once again, thank you so much to our ARMY.”

“Thanks to ONCE we were able to receive many awards. Song of the Year is especially meaningful as an artist. There have only been happy things after meeting ONCE, and so we pledge this honour to ONCE.”

“I want you to know everyone here made 7 unremarkable boys into special people…I hope we made your lives, your day just a bit more special.”

Congratulations to all the winners on their awards!