As the year is already halfway done, a number of lists to rank the popularity of idols and their number of supporters are being revealed.

In online music platform, Melon, fans discovered the popular Korean male idol groups in a ranking of their followers on site. Leading the group of twenty was EXO, who recently returned with their hit track “Monster,” with 294,397 followers. Veteran idol group BIGBANG came in second with 236, 476 and was followed by BTS, BEAST and Block B.

Leading the list from sixth to tenth places are INFINITE, WINNER, SHINee, iKON and BTOB. 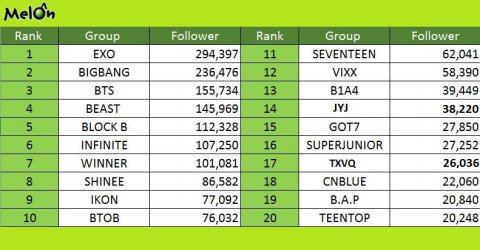 Aside from the number of followers, however, fans also discovered the download chart for male idol groups for 2016. Leading the pack is Block B with their album Blooming Period, followed by EXO, WINNER, BTS and BEAST. BTOB, SEVENTEEN, iKON, CNBLUE and VIXX also trailed close by from sixth to tenth place respectively. 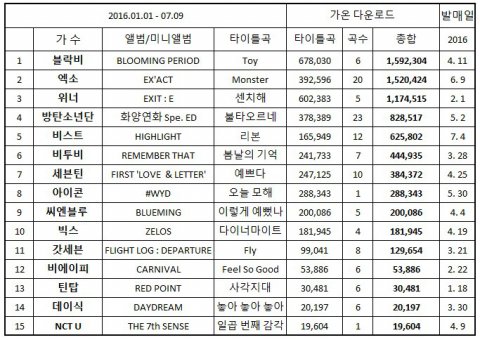