Despite the many positive aspects of living in Korea, tens of thousands of Korean citizens renounce their citizenship and move to other countries every year.

Many people all over the world wish to move to Korea, but tens of thousands of Koreans make the decision to renounce their Korean citizenship annually. The original post showed statistics of how many Koreans permanently left the country in the past three years, as well as the top four countries that the said Koreans choose to emigrate to.

They also revealed that while from 2013 to July 2105, 29,506 foreigners applied and received Korean citizenship showing that twice as many people were giving up their Korean nationality as people who were receiving it.

Specialists believe that this phenomenon is due to the fact that the younger generation put happiness and security as the most desirable asset in life over monetary success. Since Korea has low wage, long work hours and insecure jobs most people tend to look outside the country for a more stable life. 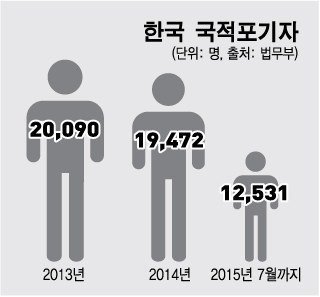 [+ 2387, – 155] There’s no future for a country that treats workers like slaves ㅋㅋㅋㅋ I predict this country’s going to collapse on itself in 30 years.

Here’s How TWICE Jeongyeon’s Relationship With Her Sister, Gong Seung Yeon, Has Changed Since They Moved In Together