Have you ever wondered what music video actors talk about during their intense scenes? Surely, they don’t actually have lines to memorize since the music plays over anyways…

In a post published on November 16th via Instiz, a netizen wrote a thread titled “This certain idol’s secret to creating the atmosphere in a music video.”

Focusing on the recently released music video by iKON for the track “Apology,” the netizen writes:

“This is the scene with leader B.I,” describing the scene as a sad segment in which he eventually ends up chasing after the woman when she drives away. “The music video’s post-scripts:” 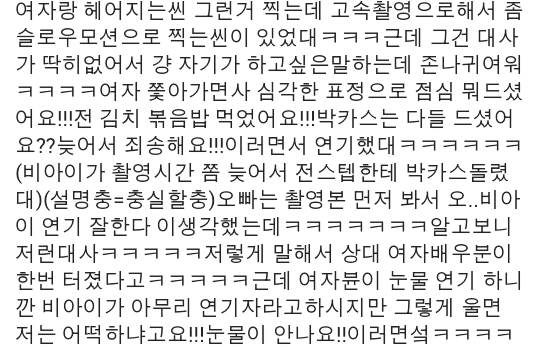 The above text described how the scene was filmed in slow motion and because the scene had no lines, everything was done in adlibs, saying things like “What did you have for lunch? I had kimchi fried rice!! Did you all drink energy drinks? I’m sorry I’m late!!!” and chased after the girl.

“(B.I was late so he gave everyone energy drinks by way of apology) I saw B.I’s footage first so I thought he was good at acting but it turned out his lines were like that ㅋㅋㅋㅋ The girl burst out once because while she was crying. B.I said, ‘I know you’re an actor but if you cry like that what my I supposed to do!!! I can’t cry!!!'”